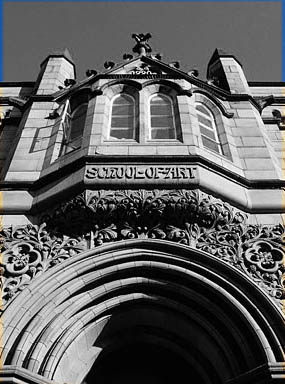 The original Manchester School of Art, containing the Holden Gallery

Varied work on the idea of destroying to create something new
Went to see an exhibition called ‘creation/destruction’ featuring the work of
Anya Gallaccio, Mark Lewis and Rut Blees Luxemburg at the Holden Gallery in Manchester Metropolitan University. The theme was, as the title suggests, creative possibilities in the act of destruction. The pieces I found most engaging were a wall piece in which flowers gradually died off during the show, and two sets of candles – one black, one white - that burned down over time, leaving behind little desultory wax landscapes. I empathise with this idea. Much of my work is concerned with entropy and decay, but at the same time, I often take what has been partly destroyed or at least disrupted, and use that as a springboard for something else; something I might not have considered had it not been for the earlier breakdown.

The gallery is in the city's historic School of Art. It was the place at which L S Lowry studied and Adolphe Valette taught.
Next
Previous