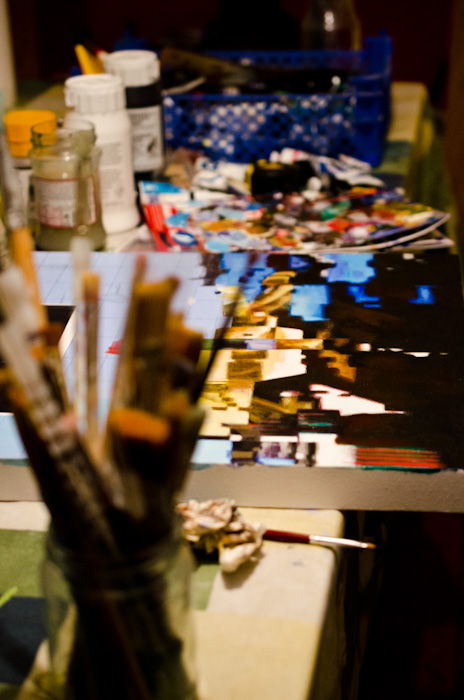 Art in a Somerset cottage, December 2015

I expressed frustration in some recent pages at not being able to paint since my move to Somerset, due to the lack of a studio. Well, the good news is that I am painting again. It’s not that I’ve acquired a studio – the stupendous day when that will happen remains mysterious, lost somewhere in the misty future – but I have found another solution: I am painting smaller and am therefore able to work in the house.

I guess these works are not necessarily small by some artists’ standards: they’re about 18-20” long side, but when you’re used to painting works of up to 6 feet across, they seem a bit dinky. Having said that, I have always made small works alongside the bigger ones, but it is a novelty to work solely on this scale.

I should be clear that I don’t think these works are compromised by matters of scale. Their content is not the same as the (usually process-based) larger pieces. They are of discrete subject matter that I haven’t worked on before and that fits this scale well. They are built on ideas that first emerged some years ago; ideas that were shelved because of other things that were in the foreground at that time. It feels right and serendipitous to bring these ideas to these canvases now.

I don’t like to say too much about works in progress, because things change and sometimes what seems a promising idea fails to work out and gets rejected. Suffice it to say, then, that, consistent with most of what I do, these new paintings are to do with space and its representations; this time it is digital ‘space’ with which the work is concerned.

Digital space has become beyond ubiquitous in our lives. It is everywhere, second only to actual space, and apparently preferred by some. I’m looking at it as I type this, as little dots contrive to give the sense of ink on A4 paper*, representing, on a flat digital screen, what would once have been the open tactile space of a typewriter and the curve of a document as it emerges from the roller.

These paintings are an exploration of some less obvious and less celebrated aspects of digital representation of space and things in it.

* I am writing this in a word-processing package - black on white, unlike the white on grey you are seeing as you read this.
Next
Previous