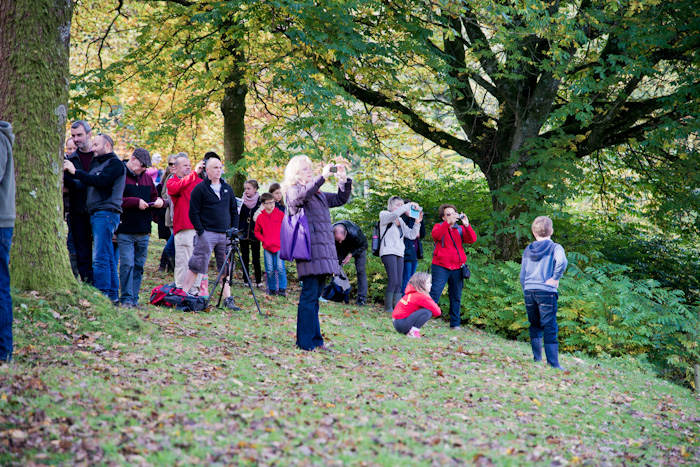 Very hidden beauty
Top Tip!: when venturing out to Stourhead for a relaxing afternoon stroll – don’t!

I took a trip there last Sunday, camera in hand, hoping to catch the majestic beauty of autumn, writ large across acres of tranquil red and ochre woodland, jauntily interspersed by Henry Hoare’s fanciful limestone follies, only to find the world and her husband had had exactly the same idea.

The winding, tree-lined paths were a continuous, slow-moving mass of humanity. From the air we must have resembled a hoard of bewildered refugees, fleeing a war-torn town in 1940s Poland. Instead of strolling freely down the paths, we shuffled along like so many languid homunculi on a malfunctioning, stop-start production line. Gazing at nature went by the bye, overtaken by the more pressing task of trying not to hit the heels of the narcoleptic in front with your toe tips.

If it’s an encounter with nature and tranquillity you’re after, the Stretford End during a derby match might be more conducive.

Arriving at the water’s edge, hoping to catch the perfect portrait of a million golden leaves shimmering kaleidoscopically in the lake, you are confronted with an array of other photographers looking back and wondering, like you, just when those a-holes across the way are going to move so they can get a decent shot. The far bank looks like an episode of The Returned: a troupe of sullen zomboids stands silently waiting for something significant to happen, and what flickering reflections there are of that famous gilded foliage are fragmented by those of stone-washed denim jeans and red fleece tops.

It quickly became apparent that this was not a good place to be for a relaxing Sunday afternoon and, after no more than ten minutes, it was time to scarper.

The fact that we live on an overcrowded little island is pretty apparent, but it is also the case that as the ability to own a car and get around and have a reasonable amount of leisure time reaches almost everyone, there is a price to pay, and this is one part of it.
Next
Previous