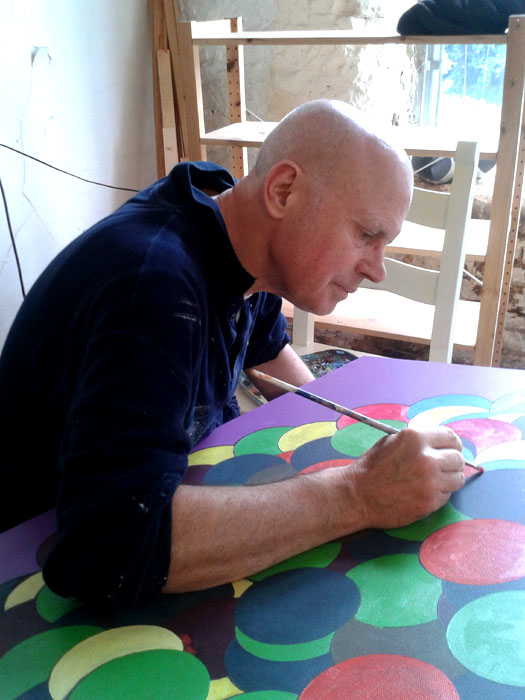 I don't have a pic of the new paintings - it's too soon! - so here's a shot of me at work earlier. Stephen Riley - Artist, Tameside, Manchester

Back in the Studio and Gallery!
Artist in Tameside

Art in my Mossley studio
My art activity has gathered pace a little over the last few weeks (it has been my photography that has garnered most attention for the last several months - see my separate photography website for more info - see under 'Links'). I took some new paintings to Jack Sevens Gallery in Macclesfield, recently, which should by now be hung and on show. And I have been working on some new things in the studio. In truth, the studio work is a resumption of work on some earlier unresolved pieces, which had ground to a halt but which I now feel are ready for moving on. Put another way: the ideas that can bring them to a conclusion now exist, when they did not before.

If this sounds crazy, it is not unusual for some kinds of artist. In fact this is to an extent deliberate: I start something that will be the basis for future thought, not an end in itself. How the work should be concluded is then to be found out as it progresses.

Interestingly, I was listening to Radio 3 (as usual in the studio) and heard of Edvard Grieg also undergoing long gestation periods in the development of his work 100+ years ago. Different medium; same problem. Anyway, I hope to have three large pieces finished by the end of the year. At least, that’s the plan, and sometimes putting a bit of pressure on yourself helps.
Next
Previous