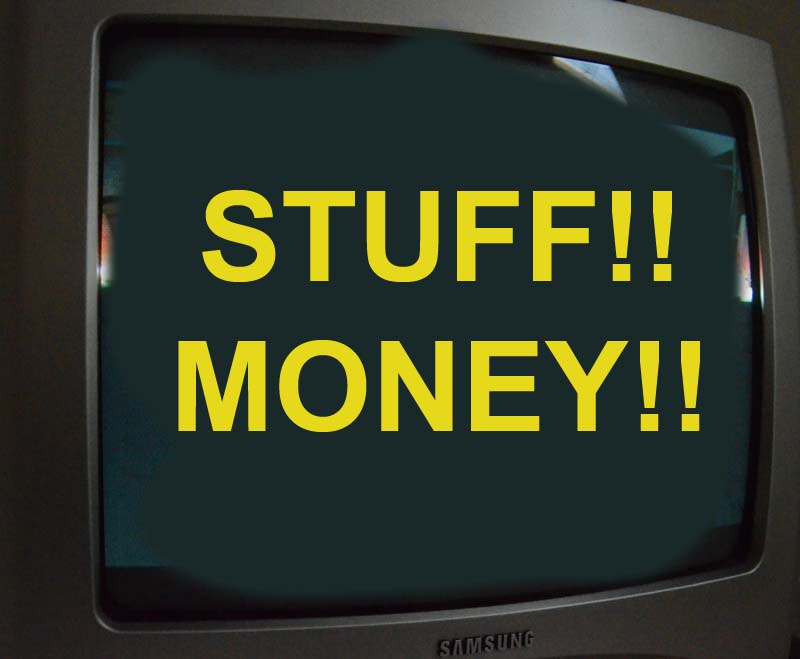 Have Adverts Bottomed Out?!

Is this the worst ad ever?!
The crassness of adverts is something often commented on, and even the core topic of programmes that scavenge around the world’s TV programming just to see how awful things can get.

But I think I may have just seen the worst one ever. It is an ad, I think, for bingo; though such was my horror at the thing, what it was for scarcely registered.

The backing track is based – probably – on that tacky 1950s pop song ‘Kiss Me Honey Honey Kiss Me’. The tune is overlaid with the words ‘stuff stuff money money stuff stuff’. As cringe-inducing as the original ditty may be, at least it tells a little story of some sort. Nothing so sophisticated here; the two words ‘money’ and ‘stuff’, repeated over and over, are all you get.

What can be seen as this plays is a roomful of waving, applauding extras – apparently more or less orgasmic at the thought of ‘money’ and ‘stuff’ – clapping along like so many performing seals. At some point we get a shot of Barbara Windsor - clearly a kind of matriarch for the event/ritual - her qualification for this symbolic leadership task no doubt being her landlady/queen bee role in the show ‘Eastenders’; that long-running television series about cockneys arguing.

In case this sophisticated interweaving of song, concepts and imagery is too much for the senses, the words ‘stuff stuff money money stuff stuff’ roll continuously, karaoke-style, along the bottom of the page, complete with bouncing ball, so we can both keep up and, should we wish, sing along at home.

We are used, from as far back as Edward Bernays, to the idea that ads are designed to appeal to the irrational parts of the mind. Here we are appealed to by the thought of ‘joining in’ and singing along with ‘the gang’ - expressing, unconsciously, our herd instinct - and from this we should be motivated to go along to the bingo hall and give our money to the proprietor, or give it away online. But there is also a direct part, which, in spite of its honesty, seems even more crass: the reduction of our complex human desires to ‘stuff’ and ‘money’. This is all there is in a consumerism-motivated life: the desire for money and the 'stuff' - the consumer goods it brings. This insult is then supplemented by others: that we can be seduced by our desperate desire to join in with a roomful of waving buffoons; that it can be taken for granted that we are karaoke aficionados; and that we might need subtitles to grasp two words - though one would hope that this silliness is a kind of self-effacing joke; but then, considering the mind-crushing level of the whole, even this might be assuming too much. In short, the ad seems to operate on the basis that its target audience has a mid-eighties IQ.

I saw the film 'Idiocracy' recently. It imagines a future (in 2,505 AD) in which mankind, through a gradual collapse into mindless entertainment and consumerism, has lost most of its language and the ability to think. Mankind has gone backwards rather than forwards. This ad would not have been out of place in that movie.

I want to think that this is as bad as it can get, but I know, deep down, that I will, if not tomorrow, then soon after, see even greater depths hit.
Next
Previous