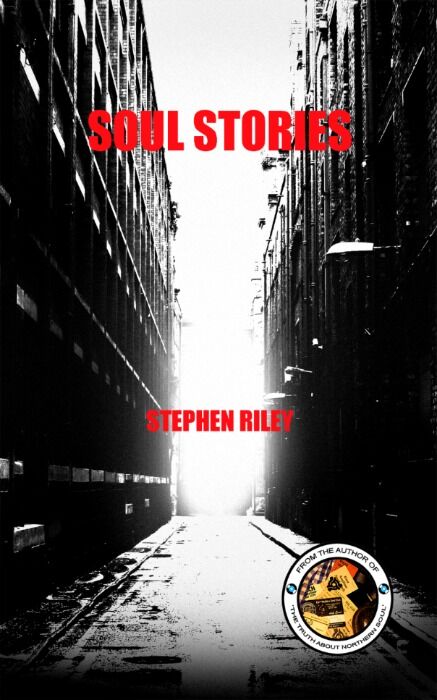 Soul Stories is out there!
Things have been quiet on the painting front for most of the last year. This is because I have been putting the finishing touches to my latest book – Soul Stories. Absence from the painting studio is regrettable, but I am delighted to have the book finished and out there. Like everything I do, it has been a labour of love – sometimes difficult, because of what it deals with, but I think worthwhile and valid in the end. Please check it out for yourself: LINK

Info:
SOUL STORIES: a novel by Stephen Riley
Soul Stories is the follow-up to The Truth About Northern Soul, but unlike its predecessor, it is fiction.
Synopsis:
A bundle of diaries is delivered anonymously to an historian. As he reads through them, he pieces together the tale of a group of young friends irresistibly drawn to the burgeoning soul music scene in the North of England at the beginning of the 1970s. Enchanted by the passionate music and the ecstatic all-night dance clubs, the friends follow a path from innocence to experience, from youth clubs and street-corner flirtations to somewhere none of them could have imagined.
After the narrator sets the scene, the book takes the form of a series of short stories, which seem at first only to be connected by the characters and the passage of time, but gradually an overall narrative emerges.
While the northern soul scene is a key reference point, Soul Stories goes far beyond that. It explores the characters’ lives both in those dark, exhilarating clubs and in a much broader hinterland. Riley creates in authentic detail the highs and lows of youthful experience in the 1970s: friendships, family, work, football, love and night-time misdemeanours, all set to a backcloth of Cortinas, frenetic all-nighters and smoky pubs. As the title suggests, Soul Stories is a series of tales ‘from the soul’ and about the souls who populate the book.
Liberated by fiction, Soul Stories expands on themes introduced in The Truth About Northern Soul (2019). A handful of tales from that earlier book are reimagined, set to the music of fiction and supplemented with hundreds more new stories to create a compelling overall narrative thread, which grows in intensity as the book develops.
Whereas Soul Stories is the follow-up to The Truth About Northern Soul, it is by no means only about the northern soul scene. The Truth About Northern Soul was aimed at audiences who wanted to read about the subject because they were part of the scene back in the day, or because they weren’t but would like to have been, or because they had an academic or a casual interest of some sort in the northern soul scene. While Soul Stories should appeal to those same audiences, it will also have meaning for a broader audience with little or no attachment to the northern soul scene, just as it is possible to enjoy Nick Hornby’s Fever Pitch without being an Arsenal fan, or Irvine Welsh’s Trainspotting without being a junkie.
From the author: “When The Truth About Northern Soul was published, it attracted a huge amount of feedback – most of it positive, I am pleased to say. One comment in particular, from a friend who knows me from way back, caught my eye. She asked why I hadn’t included certain other stories. There are two answers: firstly, The Truth About Northern Soul only needed a limited number of examples to make its case – any more would have just belaboured points and added little to the discourse. Secondly, many such stories could be embarrassing or hurtful to individuals or their families. But, from that question the idea of producing a work of fiction emerged. I didn’t, however, want just to create a piece of reportage with the names changed, and I have therefore taken the freedom afforded by fiction to get closer to the human experience of events and write creatively – to tell a story. In short, if I have been building something, The Truth About Northern Soul is the bricks and Soul Stories is the mortar that fills the gaps and holds it all together.”
Ultimately, Soul Stories is a universal tale of coming of age.
Comments:
F J Paton: “I wondered where it was going at first – the stories all seemed so innocent. But it gradually became darker and more compelling. To that extent, it reminded me of Paddy Clarke Ha Ha Ha. The closer it got to the end, the more I couldn’t bear to put it down. And when I finished it, I went straight back to the beginning and started again!”
Tim Bates: “the visceral joy of the music,” “punctuated by some very funny moments,” “a deft touch with physical injuries and automotive mishaps,” “proper showing not telling.”
Lesley Britton: “I really enjoyed it. It was evocative of the time and really brought those places to life. It made me laugh and cry.”
Dr David Cullum: “Sort of Laurie Lee, sort of Hunter S. Thompson.”
Next
Previous