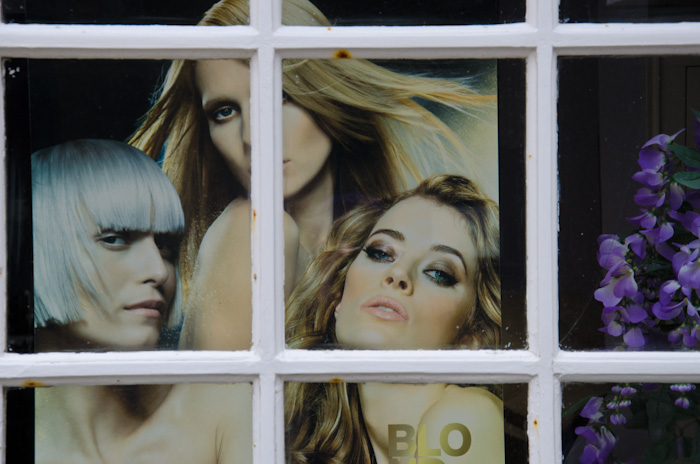 Taking a secondary photograph tends to make the viewer look for other things, ask more questions. The often absurd posturing of advertising photography in its usual settings gets lost through familiarity, but it becomes visible when re-presented for critical evaluation. Anyone who has watched TV ads with the volume turned down has probably had a similar experience.

This was a hairdressers’ shop window in Beaumaris, Anglesey. I’m afraid I cannot credit the photographer who took the original shots. I was struck by the way the models, more or less life-size, seemed to be gazing out of the window, striking poses and wearing expressions that few in real life would without feeling ridiculous, and the fact that somehow we accept this. The idea is that we are enticed into the hairdressers’ shop by such images in the hope of ending up looking like that ourselves. And we play long with the game – we enjoy the glamour (if that’s what this is) – but few would seriously expect to leave the premises looking like that or would want to even if they could. But at the same time, if the shop showed images of people who looked like us we probably wouldn't go in; it wouldn't be glamorous enough. So we all unconsciously engage in the myth.

In the actual shop window the flowers on the right are real, whilst the faces are not, but in my photograph they both have the same status. Thus, the advertisement becomes an object, like the flowers, and a more critical viewing is invited.

The fact that it says ‘blo’ at the bottom, with its ambiguities and possibilities, was a bit of a bonus.
Next
Previous