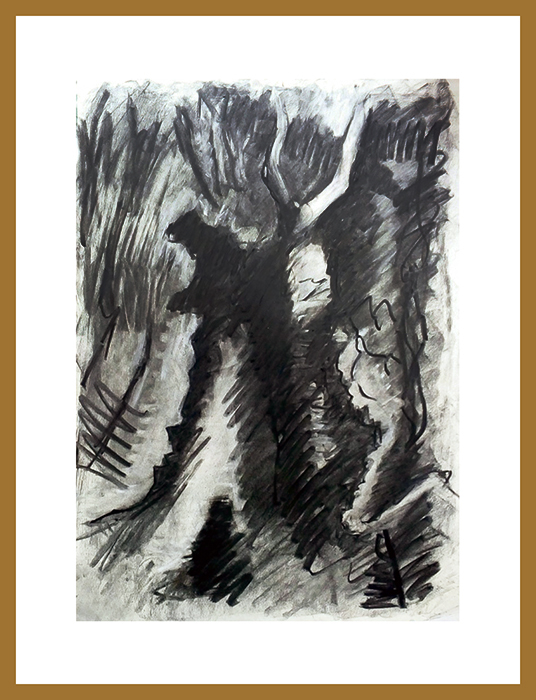 I posted on here the other week a drawing of a path going through a forest. This one was done at about the same time, quite possibly on the same day – certainly on the same field trip. This is the ruin of Mary Penny’s cottage. It resides in the same wood, near Morlogws in Wales.

A path – probably a more well-travelled, less overgrown one back in the days of the packhorse – goes past the ruin. One can scarcely make out, now, quite what is there. Just a corner of the stone building remains – a mossy stone finger poking skyward through the trees. Nature is reclaiming all and it is difficult to see where the ruin finishes and the trees begin.

The tale I heard from a local man was that the house belonged to one Mary Penny, and there was some hint that she provided a particular service for travellers who passed this way – for a penny. Hence the name.

Whether that is true, partly true, or entirely apocryphal I’ll never know, but it added to the feeling of connection to the history of the place when I was drawing this, made some kind of relationship to the humanity of those long-dead people seem more palpable. And there was also this feeling of intimacy, caused partly because this was once someone's home - their shelter, their place of refuge from the world - and because of the silence and solitude of this place. One could feel that no-one else might pass this way for years, maybe forever.

This drawing is A2 in size (excl. frame) and is for sale. Please enquire if interested.
Next
Previous