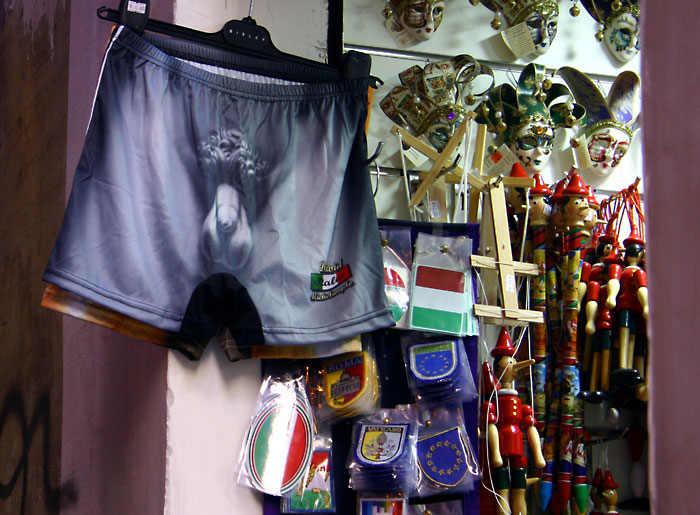 I couldn't think what picture should go with this, so here's one of some pants

World in Union: THAT song
An artist's news and views in Somerset

I vow to thee, my earholes
I generally write about art on here, but I suppose I can write about anything, as it’s my site. So, today, I would like to have a good moan about that awful rendition of ‘World in Union’ that accompanies the Rugby World Cup coverage.

"Sounds like a cat being strangled"; "absurd vocal gymnastics"; "a parrot being tortured"; "the singing is criminally awful", and "I am drowning in pain", are amongst the complaints that have been heard. There has even been a petition to get it taken down.

I was surprised to hear that it was Paloma Faith. I don’t know much about her, but what bits I have heard from her were not this bad. I can’t help feeling that the recognition endowed by a commission such as this has gone to her head and she has gone over the top in her delivery.

Sorry, love; it really does not work. I can’t imagine why anyone would try to cram so many additional syllables into ‘union’ (or ‘uni-wa-wa-ooaahn’).

As a cultural artifact, this song is already overloaded with history and meaning. It was part of Gustav Holst’s Planet Suit; the melody was extracted to form the backcloth to the hymn ‘I Vow to Thee My Country’; Vaughan Williams intervened and had his six-penneth; it became its own separate tune called ‘Thaxted’; it was sung at Princess Diana’s funeral; it was appropriated to become ‘World in Union'; it has been used in Rugby World Cups and broadcast into zillions of ears the world over, ever since.

Both the singer and ITV are unrepentant: the fault lies in the hearing of the beholders - they are just not ready for change. No; that’s not it. Things change all the time. Some changes are good; some are not. An updated version, handled differently, might have worked, but what we are presented with, in this, is pretentious, over-elaborate, over-the-top, gratuitous mangling, and everyone seems to be able to hear that, except Paloma Faith and ITV’s execs. Also, the style of sound being attempted here is based on soul music, which dates back at least 50 years and itself draws on earlier traditions of blues, gospel and jazz, so the idea that this is something radically new doesn’t stack up anyway. It's a familiar genre, badly done.

Far from this being a new kind of sound that is just too advanced for us to currently accept, and something we will get used to over time, I think it is one of those bits of broadcasting that will be wheeled-out in the future, on one of those TV shows that features embarrassing entertainments from the past, for the cringeing amusement of our descendents.

World in union - perhaps; in harmony - no.
Next
Previous