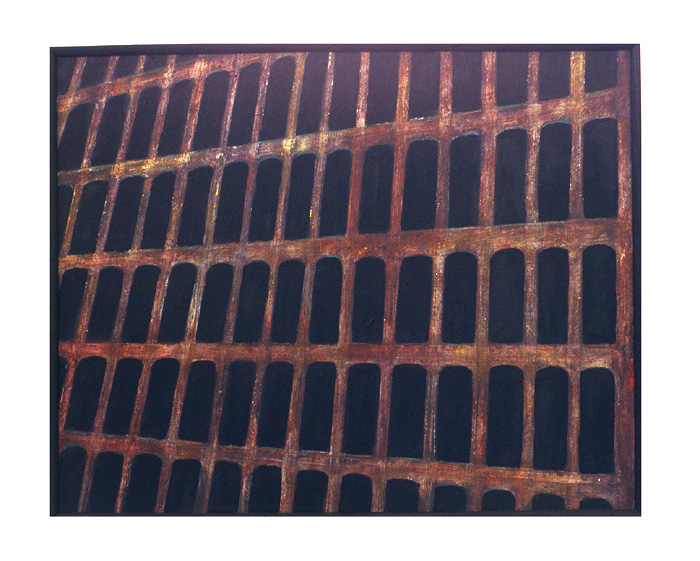 Mill. Acrylic on paper on board. Stephen Riley c.1993

rummaging and finding...
In my recent move from near Bruton to within where its city walls would be, if it had any, I've had to pack and unpack some old work, and build and organise a new painting studio. In doing so, I’ve found myself handling and gazing at some of my old work. Here's one for your optical delectation.

I was concerned then (as I still am, in different ways) with space, how we shape it and the things we put in it. This is one of several pieces inspired by the huge, dark cotton manufactories of my home town, in the Tame Valley, where Manchester meets the Pennines. From childhood, I always saw these buildings as massive and oppressive to the soul. L. S. Lowry (who lived just up the road from me) painted them small and containable; for me they were gigantic and overwhelming, and that’s what I’m trying to express in this work; that's why the structure completely occupies the field of vision - there is no sky or anything else to be seen, above or around.

Many people regard these largely defunct edifices with a degree of nostalgia. As things that formed the character of the mill towns of my childhood, I suppose I can see that their almost total erasure from the landscape is some kind of loss. However, the reality of working in them, in noisy, dangerous, sometimes lethal conditions, for long hours and little pay, cannot be something for which those who were there at the time could have much residual affection. I suspect feelings of nostalgia are best left to those who look back at these buildings from a safe temporal distance and never had to work in them.
Next
Previous