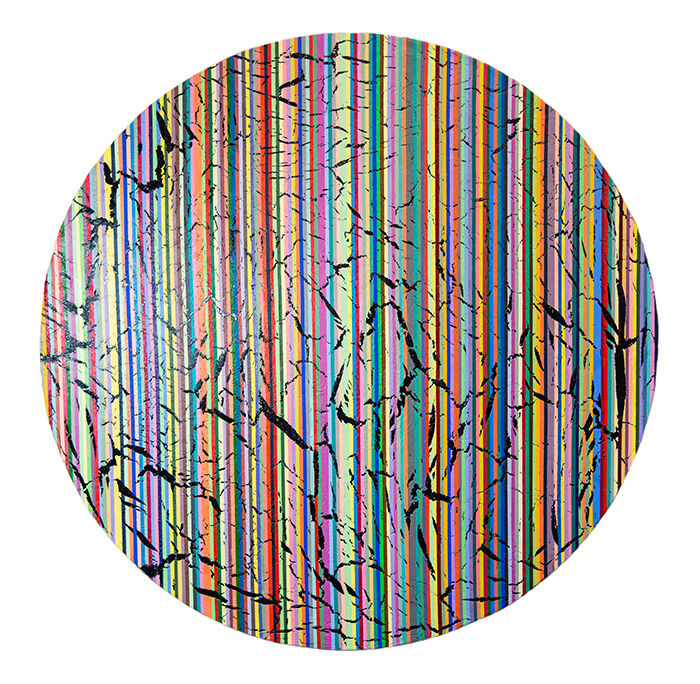 Spin Doctor 1 metre diameter, acrylic and resin on particle board

What does it mean?
A friend came round when I had just completed this painting. She looked at it for a while, then said ‘what does it represent?’

I didn’t know how to answer. It wasn’t something I’d thought about. Representation? It was an interesting question, but one I had to ponder.

It was curious that my friend thought that was the right question to ask – that representing something was what this, or maybe all paintings, should do. My short answer was it represents itself, but that was an unsatisfactory answer, for both her and me, and thinking led further.

I tend not to start off with the intent to say or represent something. My paintings usually begin with some abstract proposal; where this will take me is not necessarily predictable, or not entirely so. This is why they don’t usually have names that suggest references. Instead they acquire names through ideas that have occurred during the making process. Sometimes they get a name that suggests they are a character – this one is ‘Spin Doctor’ – or some oblique reference to how the painting is: ‘Ponzi’ made me think of endlessly cascading coins. Others get names from songs or thoughts that occurred during their making, e.g. ‘Trust in Me’.

I thought about this painting’s origins. I started by using a process to create a fractured surface. It was just white on black at that stage, lots of little Grand Canyons across a circular surface. I then left it for a long time before I thought what to do next, and that was to lay those rigid, narrow strips across it. I like the idea of an uncontrolled process and random fractures meeting something deliberate and rigidly formal – control meets loss of control. I also like bringing together something that insists that it is a surface and only a surface, with something that contradicts that and suggests depth and space – cracks in this case – these being the eternal tensions in painting: traditionally a painting is a flat surface that depicts three-dimensional space. So, I guess the painting represents the outcome of that thinking and doing process. To that extent, it is concrete abstraction – no more, no less. Other paintings, like ‘Belvedere’ and ‘Pedants’ Revolt’ follow a similar path.

But of course, that is not what my friend meant. She was asking what the painting stood for as a metaphor – I think.

Metaphor does come into it, but it hangs alongside the creative process invisibly, like a ghost. For a very long time now, I’ve liked the idea of endeavour meeting imperfection in my work. It existed in the low-key class war of my early work – a refusal to make just easily-consumed beauty – then in later work, where something pristine meets something sullied, broken or imperfect, as a metaphor for the human condition, itself an endeavour towards improvement and perfection which always exists in tension with our inbuilt capacity for self-destruction: fantastic technology and social progress abut war and climate catastrophe, and massive wealth is the flip-side of unnecessary, artificially-contrived misery and poverty. But how do you read all that into a fractured, stripy painting? You don’t. At least, I don’t think you do. It’s only there as a ghost, part of my private thinking.

There has always been ‘representational painting’ – traditionally that was the whole point of it – then came painting that did its best to escape representation, with varying degrees of success: a Pollock looks a bit like tangled undergrowth, a Rothko can look like layered skies at dusk. I recognise these are trite oversimplifications. Nevertheless, the point stands, that it is impossible for something to escape connotations entirely.

So what does it represent? It represents the fact that I did it. It represents the abstract ideas that brought it into being and changed it as it went along. Maybe it also subliminally represents the earlier paintings that were part of its genealogy and without which it could not have been thought of. The metaphors it may represent as a finished object are a matter for those who look at it. My own metaphors are connected to the outcome so tenuously that I can’t expect any particular reading, and what a viewer comes up with is an open question. There is also the argument that an artist's subconscious may have played a part, so some of what the artist has done might be hidden from the artist's conscious mind: the artist does not necessarily read the work in the way others might, just as someone being psychoanalysed needs the practitioner to reveal his mind and motivations back to him. Certainly, once a painting leaves the artist, it takes on a life of its own – the dialogue then is between the viewer and the painting. The artist has vanished. The viewer will decide what it represents.