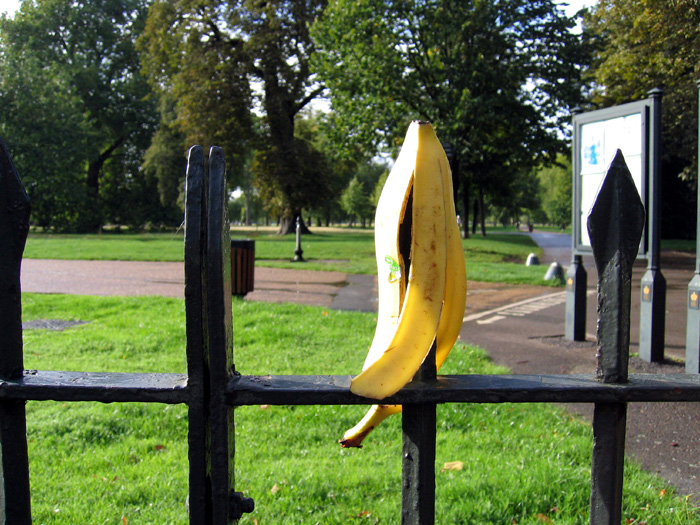 A Wentworth banana skin
I said in an earlier post that one influence on what I do is Richard Wentworth. In fact, he was kind enough to give me an interview for my PhD research. However, we all pick up influences along the way, and they meld with other influences until we become something of our own.

Richard is well known for his photographs of anonymous individual creativity; of places where people have used what is to hand as a means of problem solving; this contributing to the understanding that everyone is creative; maybe, in Joseph Beuys’ terms, that ‘everyone is an artist’, recognising that you don’t need the official sanction of an art degree, or anything else, to be inventive.

This is a Wentworth-esque photograph I took some years ago, just outside of the Serpentine Gallery in London. Here, rather than drop a banana skin on the path, someone has used a suitably sized and shaped piece of railing as somewhere to leave it. The banana skin, echoing and softening the shape of the railing head, has turned the ensemble into something sculptural. The banana also has a history within fine art due to its use by Andy Warhol on that Velvet Underground LP cover. We have no way of knowing if the protagonist here knew of that reference, but given that this is next to one of the most famous contemporary art galleries, it is not something we should rule out.

I would not normally proffer this photograph as a piece of my work; it is too much a Wentworth clone. And, indeed, what I photograph, as Wentworth does, is someone else's creativity; the photo is just what records it. What I do in my photography is parallel to what Wentworth does, but not the same. What interests me are the ways people place messages in public space. Most obviously, this would take the form of graffiti, but that has become an exhausted medium by becoming another branch of fine art, complete with stars, methodologies and numerous books. So, I seek more subtle things, like floral tributes, modifications to buildings, customisations, interventions into the corporate, and some graffiti; usually not the sort that is an artistic tour-de-force, but is quirky and inventive or has a particular relationship to its environment.

So, this is not a piece of my serious work; it is a bit of fun; an homage to Mr Wentworth, but one with a reason: it prompted this blog, which posits this part of an ongoing discussion about creativity, what it is, who does it and who owns it.
Next
Previous