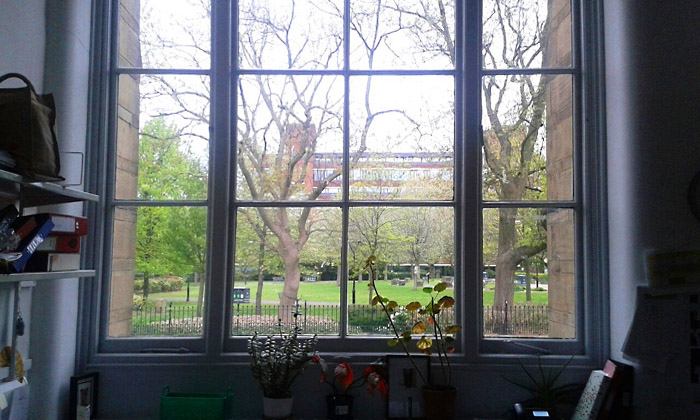 Phone-cam shot: on the inside looking out, for the last time. All Saints viewed from the Art Faculty office, Grosvenor Building, Manchester Metropolitan University, 6 May 2015

Today was my last day of teaching in the School of Art at Manchester Metropolitan University. I am off to pastures new. Those who look on these pages periodically might already know about this, as I have been selling my art work at lower than usual prices, due to the planned relocation.

Leaving the building today was a very odd experience, because of the ways my career has unfolded and of the significance of that place and others close to it in that regard. There has been a strange circularity.

I started work 44 years ago within a short distance of the University (which wasn’t a university then – more on this below). My first week at work – as a Gas Engineering Technician Apprentice – comprised 5 days of fairly leisurely induction at offices on Whitworth Street, within walking distance of where I was today, and a few doors down from where the world famous Hacienda club would materialise a decade or so later.

After that came five years of block-release study, involving countless trips to what was then Stretford Tech (now North Trafford College). Getting there involved, first, a bus from Stalybridge into central Manchester; then another, which wound its way out to the college via the zig-zaggy streets and notorious deck-access flats of Hulme. Now demolished, they then comprised some cast concrete semicircles, like an architect’s bad pun on the Royal Crescent in Bath; and some more commonplace-looking, rectangular ones. I remember gazing at these buildings from the smoky upper deck of the bus. Even then – long before I studied art – I was taken by the fact that the designers had introduced black lines, pale grey panels and occasional coloured blocks into the finish of the rectangular flats, turning them into three-dimensional Mondrians. No doubt they looked a lot better on the drawing board in the 1950s than they did in the flesh in 1971.

I then left Manchester for a time, only to return in the 1980s, coming back once again to precisely where I was today. In the mid-80s, I took the decision that I’d been putting off all my life: to study art seriously. In 1988, I threw in the towel on my career as an engineer and became a mature student at what was then Manchester Polytechnic, studying for a Diploma of Higher Education in Interdisciplinary Studies.

The Dip HE was a curious but not un-useful qualification. It was primarily intended for mature students, returning to education and seeking a general reintroduction to the strictures of study, before specialising. The idea was that you would do a range of topics, then gradually home-in on what would be your degree subject. Thus, after completing the two years of Dip HE, you would switch to your chosen bachelor degree, joining it at the start of the third year. This concept was not without its problems, however, as joining, with your general education, a group who had already been specialising for two years, was not always easy. I didn’t mind any of that, however, because I wanted to study Fine Art for the full, standard three years and planned to, and did, go back to the beginning of a three-year bachelor degree once I had completed my Dip HE. But, however you used it, the great thing about the Dip HE was that you could mix and match your subjects and, by a certain amount of creative wrangling, you could more or less turn it into a substitute Arts Foundation Course. That is what I did, and after two years in Manchester I headed off to Exeter to do my BA in Fine Art.

Much subsequently happened, in terms of teaching, art-making, writing and personal shenanigans, between that moment and my returning to Manchester to teach in 2012.

But anyway, I digress. The point I wanted to make was that in leaving Manchester Metropolitan University today, I was walking away from the place that had given me my first taste of proper art education. As I walked down the corridors of the Grosvenor Building for the final time, the whiff of oil paint was once again in my nostrils, just as it had been on my first day there, 27 years ago, and I could see through the glass doors into the Fine Art studios, where a cluster of earnest-looking young people was undergoing a group tutorial in front of part-finished canvases. It was quite poignant.
Next
Previous