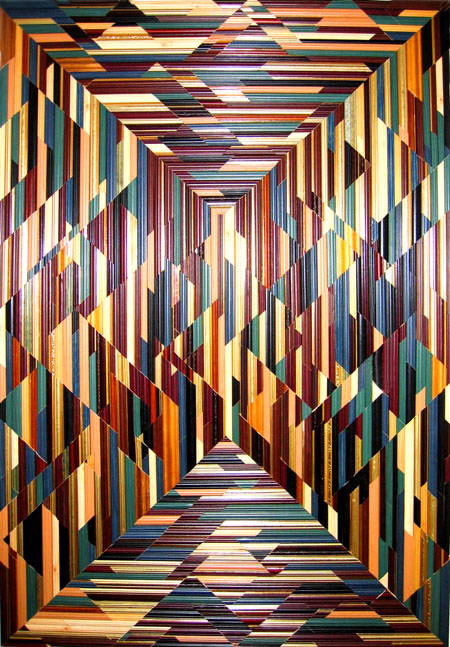 Amazing piece of work to be sold!
Hi All

I would like to sell this art work. It is part of my PhD output from the late 1990s. It has been exhibited twice: in London and Manchester.

I think it is a very strong piece of work, which communicates on several levels. However, it is large and heavy and takes up a good deal of space in my studio. I am therefore hoping it can go to a good home where it can be properly installed and enjoyed.

It is 6 feet x 4 feet and made entirely from picture frame moulding, laid on board and timber. It is from a period when I was making art from all the non-art things that accompany it. I worked out once that, laid end-to-end, the moulding would be app 400 feet long. It took six months to make.

I called it ‘Axe’ after the Devonian river of that name, because it made me think of Frank Stella’s geometric abstractions from the late 50s / early 60s, which would often be named after things to which they had no apparent connection. Also, the shapes within it made me think of As and Xs.

I appreciate that whoever finds themselves reading this might not be interested, but I’m sending this around on the basis that it might be sent on and eventually reach someone who really wants it.

Price: open to discussion. I need the space, so open I’m to offers.