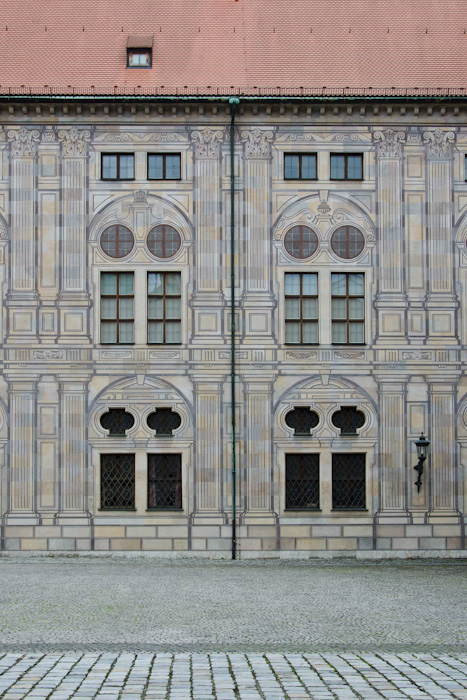 So, while I’m not able to paint, here’s another example of my fine art photography, showing another interest; or, rather, one aspect of the same set of interests: how we express ourselves in spaces.

This is part of a body of work concerned with simulacra in public spaces: instances where something has been modified to appear to be something it is not. This is in Munich. I can’t remember which building, now – possibly an old royal palace – no doubt a Munich historian would be horrified at my ignorance and would like to tell me. I’m all ears.

What is essentially a plain, flat wall, with some rectangular and ornately-shaped windows, has been painted-up to appear much more elaborate, with many architectural flourishes and additional round windows. The pillars and all the little decorative flourishes are phoney.

These things are a curiosity. Did anyone when this was created actually think anyone would be fooled? Was that ever the point, or was a funky paint job the done thing? If so, it seems ironic that, even though such work would be expensive, it would be much cheaper than the architecture it pretends to be, and so, whereas this is a grandiose statement, it is also one that declares the limitations of the owner’s funds.
Next
Previous